This is a semi desert region in north Rajasthan and is situated entirely within the triangle formed by Delhi-Bikaner-Jaipur. Shekhawati represents a region and not just a town or fort. It derived its name from its ruler RaoShekha. Shekhawati means the garden of Shekha .

The towns of Shekhawati region are known for their amazing painted havelis. So varied and architecturally rich are the havelis that this region is dubbed as the "open art gallery of Rajasthan". The plethora of painted Havelis in rich artistic tradition makes them fascinating. Most of the buildings are dated from 18th century to early 20th century. The Shekhawati region is dotted with so many havelis that tracking them is something akin to a treasure hunt. Various forms of fine art adorn the walls and the ceilings of these structures as a contrast to the otherwise flat and barren land. The havelis are noted for their frescoes depicting mythological themes and huge animals. Some later day frescoes reflect British influence in the form of steam locomotives and trains depicted on them.

There are also forts, minor castles, mosques, step-wells (called 'baoris') and chattris. The Rajputs mostly depicted the themes of historical events, personage, folk-heroes and prominent war scenes, while the Marwaris concentrated more on religious themes. However, with the passage of time and advent of the British their motifs too began change. 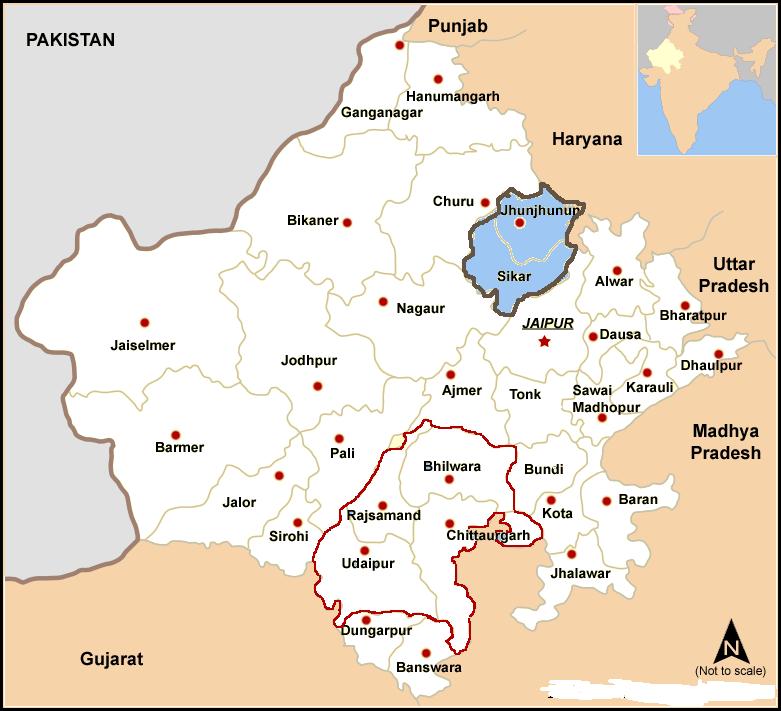 As the authority of the Mughal empire weakened following the death of Emperor Aurangzeb in 1707 AD, the descendants of RaoShekha grabbed the territory west of AravaliRange . The chieftains of the region still acknowledged the suzerainty of Amber ruler who conferred the title of TazmiSardar on them. It was probably their exposure to the royal court in Jaipur that piqued their interest in the art of frescos.

In the beginning of the 19th century, with the establishment of Major parts like Calcutta (now Kolkata) and Bombay (now Mumbai) by the British, the focus shifted from the ports of Gujarat , thus adversely affecting the commercial activities of the region. In the meantime, the contact between Jaipur and Shekhawati became tenuous and commerce on this route came to a standstill. In due course of time, the Shekhawati trade route was almost abandoned. This shattered the once flourishing economy of the region. This seasoned Shekhawati merchants were thus constrained to migrate to greener pastures like Calcutta and Bombay , where they established themselves and earned huge wealth by dint of diligence and business acumen. They repatriated this wealth to their home towns where it was utilized for building havelis and schools, promoting social welfare, digging wells and constructing reservoirs.